Headquartered in Phoenix, Arizona, Autom Catholic Gift Company falls under the umbrella of a larger company, Christian Brands.  Founded in 1948 by Ignatius DiGiovvani after a conversion experience in hospital, the name "Autom" is a compilation of two saint's names - St. AUgustine and St. THOMas Aquinas.  The founder chose these two saints for both their level of intellectual leadership as well as their deep spiritualities.  Although Ignatius went home to God in 1973, his legacy has continued on through the efforts of his family.  His two sons, Paul and Thomas, continue to manage Christian Brands, and Ignatius' wife, Alice, remains active in the company as well.  Autom remains one of the principal distributors of affordable Catholic products, with an enormous selection of prayer aids, Catholic gifts, books and saint memorabilia. 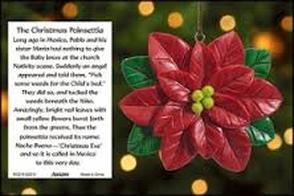 The Christmas Poinsettia
2012
This ornament is made out of resin, and resembles clay in its feel. It's painted bright red and green, and is a fair resemblance to a real poinsettia.  It also comes with a business size card that tells the Legend of the Poinsettia.  Most people have already heard it - a young child has nothing to give Baby Jesus as an offering on Christmas Eve, but she is directed by an angel to pick some ordinary weeds that grow outside the church. She offers them to Jesus, and the green leaves suddenly turn a brilliant red color.  The modern poinsettia.

I included this ornament because it is one of the common symbols we see at Christmastime, and if we look at creation the way the Catechism invites us to - as a revelation and communication of God to his people - the poinsettia has a lot to say.  Usually called in Spanish "the Flower of the Holy Night"  it bears a striking resemblance to a fiery star.  In fact, poinsettias are often linked to the star that led the 3 Kings to Jesus. Many people view them as the plant kingdom's version of the cosmic star.  I like how the legend of the poinsettia reminds us that it is an offering of the heart that is most important to Christ, that the offering of the poor child is as valuable to Jesus as the offerings of the wealthy.  We shouldn't automatically assume, however, that they more important.  By this I mean that in reality, the weeds that the child offered were not the real offering.  It was the girl's willingness to let go of her pride, and risk being mocked in front of the other people in the church, that was the true offering.  She was really giving a pure and humble heart, unaffected by pomp and circumstance.  That, as the gospels show, is what is most attractive to Christ.  On the other hand, we don't know the extent and purity of heart that any of the other gifts were offered - they may have been just as acceptable to Christ, if all were responding to him from pure motives.  The poinsettia to me most closely symbolizes the Sacred Heart.  It takes a normal, run of the mill thing - a bland, green plant - and transforms into into something new, on fire, alive.  How appropriate that this festive plant has become associated with the celebration of Christmas!